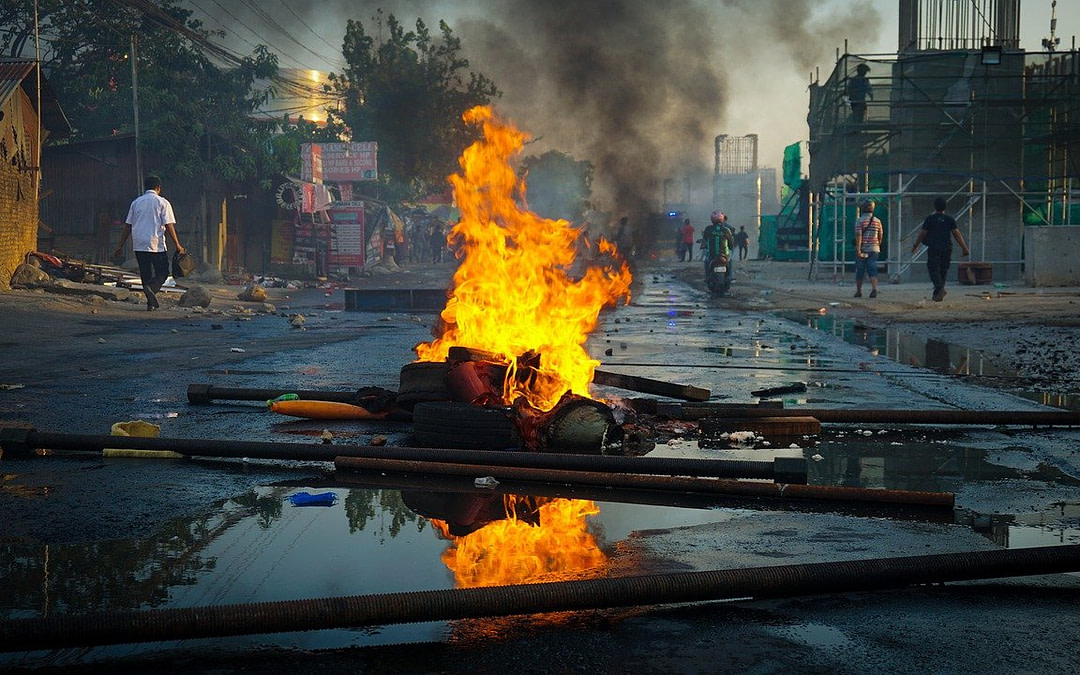 The journalists are too afraid to go closer to the mall in Pietermaritzburg. Almost no police are in sight outside the mall, but it appears that some people are being arrested. Male and female looters are walking away with trolleys piled high with stolen goods. The air is hazy with smoke as it is clear that the whole mall has been destroyed beyond repair. There is no evidence of ANC regalia or posters or signs showing support for ex-president Zuma. This is blatant rampant thuggery by individuals intent on ” piggybacking” on a pretext that they are protesting; it is criminality, pure and simple!

During the course of the day the looting continued in several areas of the country, including the centre of Johannesburg, Kzn South Coast; and now at 3.30 p.m. in Mafikeng in the North West Province.

It appears that there is a severe lack of police presence in the various centres in the country where looting is going on. There is some use of rubber bullets, and tear gas but the the police are severely hampered by lack of SAPS members. Amazingly, the police are so poorly equipped that they are using shoelaces; having run out of handcuffs. I saw visuals where police who were trying to quell the looting failed to arrest looters, because they have insufficient training in how to make arrests; and the perpetrators; when faced by a single policeman, simply wriggle out of the policeman’s grasp and run away.

The policemen; having been warned to take a ‘soft’ approach with the public are simply being overrun. Some of them carry guns, some shoot at looters with rubber bullets, but overall seem powerless to resist the lawlessness that is being committed with impunity.

Some soldiers were seen standing around, seemingly without any supervision, this deployment needs to be organised and accurately despatched to all looting hotspots immediately, to stem this destructive tide that is destroying the country, as we watch.

is being invaded by looters. The police are outnumbered three to one. Smoke is pouring from the roof of the mall. looters are running away from the mall with trolleys full of stolen goods, There is a brand new stove standing in the street. A similar situation prevails in Chatsworth.

At the moment the looters are in control!

Apparently, President Ramaphosa is speaking to the nation tonight, in response to the epidemic of looting.

The president has to draw a clear line showing what constitutes “criminalistic violence” against lives and property – and state clearly that arrests, prosecution and punishment will follow such actions.

As darkness falls, in the vicinity of Musgrave Mall, private citizens, some of whom armed are taking the law into their hands, saying that seeing the failure of the police to control, they are determined to protect themselves against the looters.

Fact: The loss sustained by business owners in KZN; including those who are insured and others wo are uninsured amounts to approximately a billion Rands.

A significant amount of jobs have been lost; thus the amount of poverty and unemployment in the affected areas has increased.

Although the riots were initially sparked by protests against the former president’s incarceration; the information generated so far suggests that the motives behind the theft and destruction were primarily greed, or poverty, and were not due to political or tribal expression.

The most serious effect on the country is the setback it has caused in the fight against the Corona Virus; the increase in deaths that will occur due to loss of resources in the health sector.

Shops have been broken into and sporadically, individual looters are sneaking into the derelict shops. There is a fire burning in the street. Police are chasing after a moving crowd of looters. The police are showing extreme tolerance towards these lawbreakers.

Concerned residents have blockaded a section of the town off to prevent drivers from entering the area, in order to protect lives and property.

People have been looting a bottle store during the night, and crowds of looters, or perhaps just some onlookers are hanging around the streets.

Right now, I have just seen the prone body of someone being lifted from the ground. People who are loading looted goods into cars are being arrested.

I have never been a fan of Mangosuthu Buthelezi; but I have to admit that what he is saying makes sense under the circumstances right now. He says that the police are unable to control the situation and that the 2000 soldiers that are being deployed right now are totally insufficient to handle the matter and that Ramaphosa should put 70000 soldiers on the ground to solve the problem.

The country is burning right now. Buthelezi says the country is at war, not only against Covid 19; but even more so against our own citizens who have been rendered desperate as they are losing the war against poverty, disease and corruption.